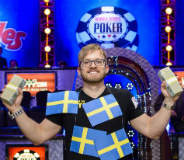 10 for 10 is a documentary about Swedish poker pro Martin Jacobson and his victory in the 2014 WSOP Main Event. The trailer has been released and features a behind the scenes look at his poker career.

In 2008 Jacobson had an opportunity to try make it as a poker pro after winning an online satellite tournament to the 2008 WSOP Main Event which he busted out on the third hand. This was his first big live tournament that he played and it didn't end well for him.

Martin continued to play online satellites to live poker tournament and qualified for several other events including: EPT London and EPT Budapest where he made his first cash in a live event finishing in 3rd place.

His success in live events eventually amounted to more than $5 million in just six years of playing poker with 55 cashes and 27 final tables appearances.

In July 2014, Martin Jacobson entered the Main Event where he outlasted a field of 6,683 players to take home the title. His $10K investment became a whooping ten million dollars. Jacobson was just 27 years old when he became the 2014 WSOP Main Event champion.

Martin Jacobson was asked if he cared more about the money or the title and replied that the bracelet meant more to him that the money.

There are WSOP freerolls and step tournaments which start from just 1¢, play your way to the weekly qualifier every Sunday to win a prize package valued at $13,000.

Prize packages include: Main Event buy-in, accommodation, cash for travel and spending all you need to get you to Las Vegas for the biggest live poker tournament series in history.