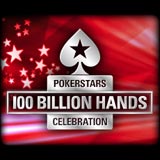 To continue with the 100 Billion PokerStars Promotions there is still an extra five million to be won this June.

Here are some of the promos players can take advantage of:

Use the PokerStars marketing code when signing up and get a 100% first deposit bonus up to $600.

That's more than five million to be won in the 100 Billion PokerStars promotions which run until the end of June. If you haven't already joined the Worlds biggest poker site now is a good time, get your seat to the million dollar freeroll tournament on PokerStars.

Get your ticket to the PokerStars Ultimate Freeroll, the million dollar freeroll tournament. The free poker tournament will be one of the biggest freerolls ever, there are two ways for players to qualify: Make a deposit or complete the PokerStars Trivia question to get entry to the Trivia Freerolls.

Answer the PokerStars trivia question to get the password for the Trivia Freerolls where the top 50 players get a ticket to the PokerStars Ultimate Freeroll.

*Bonus Codes are only valid at PokerStars until 30 June 2013.

Play SNG games on PokerStars between the 17-23 June for your chance to win your share of a million dollars during the promotional dates.

The more SNG's you play the greater the chance of playing a special Golden Sit & Go, players will be notified before the first hand is dealt and the table with be themed for the promotion.

All SNG games qualify excluding satellites or steps, register for these tournaments by clicking on the Sit & Go tab in the lobby.

Zoom Poker is PokerStars fast fold poker game which allows players to play more hands by folding and moving to a new table and new hand.

Zoom 100 is a new PokerStars Zoom Poker tournament which features a million guaranteed prize pool for a buy-in of only $109. Satellites are also available offering a cheaper alternative for players to qualify for a ticket.

Register for the PokerStars Zoom 100 in the lobby by clicking on the Tourney then Special tab.

Players that are dealt the exact same hand as the winner of the greatest hand in any Zoom Poker cash games win cash prizes 100 times the big blind of the table stake up to $100.

Players must then share their hand on the PokerStars Boom Hand Replayer to qualify for their prize.