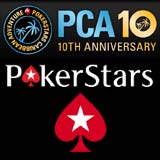 PokerStars 10th Anniversary PCA qualifiers are running with a weekly tournament that offers 10 guaranteed prize packages. The qualifier features an insanely low buy-in of only $10 to win a 2013 PCA prize package worth $16,000.

But it doesn't end there, players can get their entry to the weekly event for FREE!

That's right! make your first deposit or deposit using the 2012 PokerStars Reload Bonus Code and get a free tournament ticket worth $10.

Take advantage of this PokerStars Deposit Offer, there are a 100 prize packages to be won for the PokerStars Caribbean Adventure 2013.

PokerStars are celebrating their 10th Anniversary of the PokerStars Caribbean Adventure by offering 100 players the chance to play poker in paradise in The Bahamas. Each week there are 10 guaranteed prize packages to be won and a total of 100 PCA prize packages up for grabs until 9th December 2012.

For only a buy-in of only $10 each week you could win a passport to paradise, prize packages are worth $16,000 and includes: PCA Main Event buy-in, Hotel Accommodation and Travel cash.

Get your seat to the qualifier for FREE! Make a deposit and get a free tournament ticket worth $10.

New players can download PokerStars, use the PokerStars Marketing Code when signing up.

To qualify for the free PokerStars Tournament Ticket worth $10, players must either make their first deposit or reload their PokerStars account with the relevant bonus codes below.

New players must enter the PokerStars Bonus Code 'PCA600' on the deposit screen of the cashier, the minimum deposit is just $10 and the bonus code is valid until 9th December 2012. Player are still eligible for their 100% first deposit bonus up to $600 on PokerStars.

Players who have have already made their first PokerStars deposit must use the PokerStars Reload Bonus Code 'PCA10' before the 13th October 2013. Act fast and get a free tournament ticket worth $10 when reloading your PokerStars account with at least $50.

Players can use their tournament tickets to play the weekly 2013 PCA qualifier where there are 100 guaranteed prize packages to be won up until 9th December 2012.

Register for these events from the PokerStars lobby by clicking on the Tourney then Special tabs.