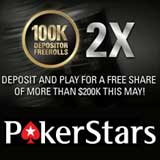 PokerStars have doubled their 100K Depositor Freerolls this May offering players entry to $200,000 in PokerStars freerolls. To qualify players must make their first deposit or reload their PokerStars account for entry into eight daily freerolls which have more than $1,000 prize pool.

The freerolls are freebuy tournaments, which is a freeroll with rebuys, all rebuys are added to the $1000 prize pool. Deposit now and get 31 days entry to the PokerStars Depositor Freerolls.

The PokerStars Depositor Freerolls will have double the amount of events running this May, thats $200,000 in freeroll prize pools to be won just for making a deposit of at least $10. Depositing players will have access to 31 days of PokerStars freeroll tournaments, there are a total 248 tournaments with eight daily freerolls with a $1000 prize pool.

Players can register for as many PokerStars freerolls as they can play before their ticket expires 31 days after making a deposit.

To qualify for the PokerStars Depositor Freerolls

PokerStars have doubled the amount of freeroll tournaments running this May, instead of four daily $1000 freerolls there will be eight daily freerolls. These tournaments are freebuys which means that players can rebuy up to three times within the first hour, each rebuy costs $0.30 and is added to the tournament prize pool.

Rebuys can increase the prize pools drastically offering even more value than the original $1000 added by PokerStars.

These PokerStars freerolls can be found in the lobby by clicking on ‘Tourney’ & ‘Freeroll’. Only players who have deposited, either first deposit or reloaded using the bonus code will get free entry for 31 days.

Players can check their ticket expiry date by clicking on ‘Requests’ & ‘Tournament Tickets’ in the lobby menu. The Pokerstars depositors freerolls will feature eight daily event until 31st May 2012. You won't find better value than this anywhere else online especially if you're a freeroller or micro stakes poker player.

PokerStars is the Worlds largest poker site and is an excellent poker room for beginner players looking to learn how to play poker online with daily online poker freeroll tournaments.