Get your seat to the 2010 Aussie Millions Poker Championship, win a $14,5k prize package (which includes travel, accommodation and main event buy-in) from Pacific Poker and play in the biggest poker tournament in Australia.

The Aussie Millions 2010 takes place in January, the event will attract some of the biggest names in poker. Qualify for your seat through 888 Poker, make a deposit and get 100% of your deposited amount matched up to $400 with an 25% instant poker bonus released into your account.

The first Aussie Millions event started out in 1997 with only 74 players participating in the tournament which had a $1000 buy-in. Each year the event has grown in size and since it has been televised, attracts more than 700 players from around the world including top poker pros such as locals Tony G and Joe Hatchem and international pros Phil Ivey, Daniel Negreanu and Mike Sexton.

Get your seat to this prestigious poker event from Pacific Poker depositing players get 100% of your first deposit matched up to $400 including a 25% instant poker bonus. No bonus code is required when signing up to PacificPoker. Players can even freeroll their way to the Aussie Million main event. 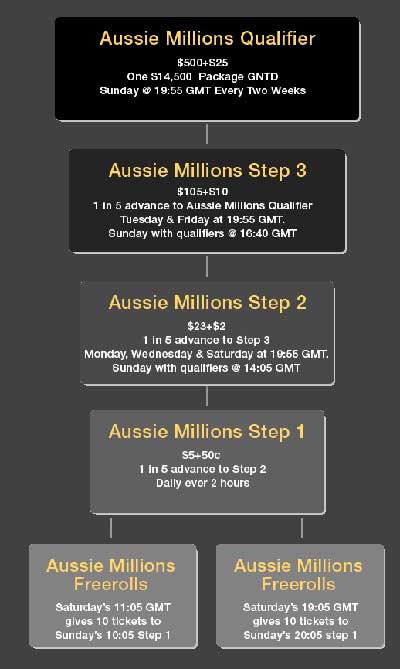