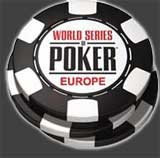 The 2010 WSOPE High-Roller Heads-Up Championship continues today with only four players remaining in the event, Gus Hansen vs Andrew Feldman and Jim Collopy vs Ram Vaswani.

The remaining players will be completing for the title and a WSOP bracelet, this may be a first bracelet win for Full Tilt Poker pro Gus Hansen who has made it so far against a playing field of 103 which included some big names such as Daniel Negreanu, Huck Seed, Howard Lederer, Phil Ivey, Chris Ferguson, Phil Ivey, Tom Dwan and Phil Hellmuth.

The 2010 World Series of Poker Europe main event has already began with two days of late registration at the Casino at the Empire in London.

This is the closest Gus Hansen has come to winning a WSOP bracelet with more than $7 million in tournament career earnings the Full Tilt Poker pro has yet to achieve winning his first bracelet.

The WSOPE event #4 will continue today in order for Gus Hansen to win gold he will have to win in his Head-up match against Andrew Feldman then beat the winner of the Jim Collopy vs Ram Vaswani match in the final event.

The final four players are guaranteed £96,000, with a first place prize of £288,409 and the WSOP title and bracelet. The High-Roller Heads-Up Championship broke an attendance record this year with a prize pool of £1,030,000 the first time the event ever reached more a million pounds.

Gus Hansen beat Andrew Feldman and made it through to the Final event verses Jim Collopy, after 12 hours of heads-up no winner was determined with both players tie in chips by the end of the day. The final will continue on Friday until one of the players is eliminated.