Pius Heinz is the 2011 WSOP Main Event champion, the 22 year old is the first player to win the title and bracelet for Germany. The final heads-up match featured European players Pius Heinz verses Martin Staszko when Ben Lamb was eliminated on the fourth hand finishing in 3rd place.

The chip lead switched several times between the two heads-up players, the aggressive battle last more than five hours but in the final hand the German beat the 35 year old player from the Czech Republic.

The epic Heads-up match was the longest lasting event for the last 10 years of the World Series of Poker.

The final three players returned for Day 10 of the 2011 World Series of Poker Main Event at the Penn & Teller Theater, Rio Casino in Las Vegas. The action started right from the start with Martin Staszko eliminating Ben Lamb on the fourth hand of the night.

The European players continued in an aggressive Heads-Up match which was broadcast almost live with only a 15 minute delay on the official WSOP website and ESPN with commentary from Lon McEachern, Norman Chad and Antonio Esfandiari. Poker fans can also see the hole cards once the players have folded or reached showdown

Congratulations to Pius Heinz winner of the 2011 WSOP Main Event defeating Martin Staszko in the longest Heads-Up match in the last 10 years of the World Series Of Poker. 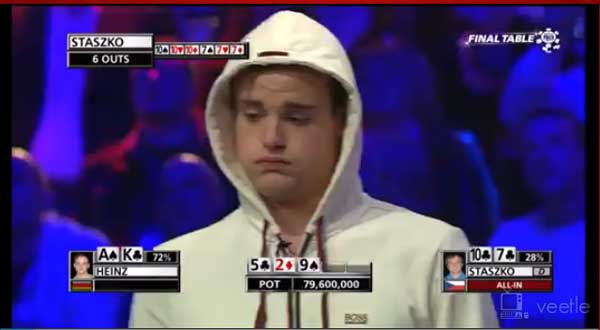 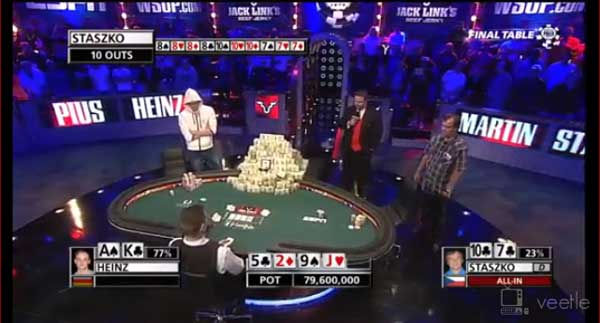 The Final hand of the 2011 WSOP Main Event

Martin Staszko open shoved the remainder of his chips 39.5 million and was quickly called by Pius Heinz, heres how the hand played out.

The final results of the 2011 World Series of Poker Main Event November Nine which took place on 6 - 8 November 2011.

6,865 players registered for the 2011 WSOP main event making it the 3rd largest tournament in the history of the World Series of Poker with the prize pool adding up to $64,351,000. The 2011 WSOP November Nine payout is listed below:

* World Series of Poker and WSOP are trademarks of Caesars Interactive Entertainment, Inc. ("CIE"), and are in no way associated with WinAllPoker.com