The World Series of Poker Main Event final table has played down to the final three November Nine players who will return on Tuesday to determine the WSOP Main Event Champion 2011.

The current chipleader is Pius Heinz who may just be the first German player to win a main event. Heinz has almost double the chips stack that Ben Lamb has going into the final three.

There were some pretty classic and action packed hands with the final four but the day came to an end when Matt Giannetti was eliminated shoving allin pre-flop with a weak A3 and Ben Lamb calling with pocket kings to hit quad kings on the flop.

Poker TV fans can watch the action live with a 15 minute delay on the World Series of Poker website here - WSOP 2011 Live Video or 2011 WSOP November 9 Live on ESPN make sure you tune in for the Final three on Tuesday 8th November.

The WSOP final table features commentary by Lon McEachern, David Tuchman, Norman Chad, Phil Hellmuth and Antonio Esfandiari with in depth analysis on the final table play. Another great feature this year is the hole cards are displayed so fans can see all the action like never before. 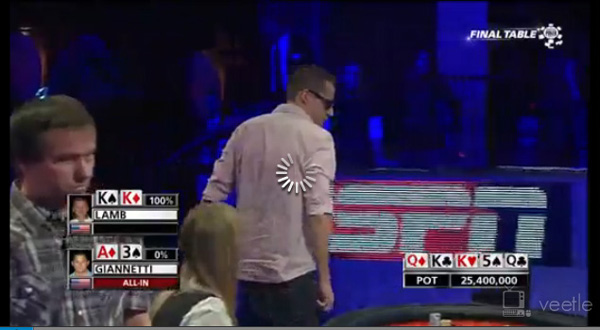 With only three players remaining, only one player will be crowned champion. Below are the results of the final table where play continued until only three remained on Sunday 6th November 2011.

The total prize pool for the 2011 WSOP main event accumulated to more than $64 million in the third biggest main event tournament with a playing field of 6,865 players.