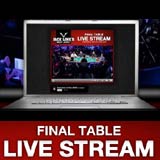 The 2012 World Series of Poker final tables will all be streamed live on the Internet, with a five minute delay. This is great for poker, because all 60 WSOP bracelet events, final table players and bracelet winners will get the exposure they deserve.

Poker fans can watch the 2012 WSOP live, footage will be available when the tournament reaches the final table.

Other changes to the 2012 WSOP include a more relaxed rule on table chatter and player celebration. Players are now allowed to speak freely or celebrate when winning a hand, within reason, as long as it doesn't disrupt the tournament or reveal important information to players still involved in a hand.

Watch all the WSOP final tables bracelet events streaming live on wsop.com, there are up to three different streaming links depending on how many tournaments are played on that day. The set-up seems pretty involved with six camera angles including commentary which will all be on standby until a final table is reached.

WSOP commentary and poker hand analysis will be done by David Tuchman.

David Tuchman comments “It doesn't get bigger or better than the World Series of Poker, I am excited and humbled to be working with the WSOP to bring the live stream to a hungry and growing audience.”

The two filming locations will be the Amazon Ballroom’s Main Stage and the Pavilion Ballroom Stage will act as a secondary stage for final tables. Additional filming crew will cover all other final tables if both stages are in progress, with commentary from the WSOP tournament director. The Amazon Purple section will be used as a third stage for WSOP final tables.

There will be a 5-minute delay on the 2012 WSOP Live stream due to casino regulations, all cards that are visible to the table will be shown such as community cards and all-in hands.

All WSOP live final table streams will be on a 5-minute delay without hole cards, to conform to gaming regulations.

Qualify for your seat to the 2012 World Series of Poker, there are several online poker sites offering players a chance to qualify online. See the links below for more details on how to win your seat to the biggest live poker tournament series.