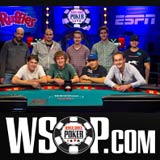 The final table for the World Series of Poker returns on 4-5 November, nine players battling it out for the title and millions for first place finish.

888 Poker JC Chan has his eye on the prize having the chipleader advantage starting out on the final table.

Watch all the action on ESPN2, the cards will be dealt from 16:30 Pacific Time with a fifteen minute delay from the live action. Poker fans can also watch the WSOP Live Streaming sponsored by 888Poker worldwide and Slotmania in US.

Commentary will be provided by Lon McEachern, Norman Chad with additional commentary by poker legends Antonio Esfandiari and Phil Hellmuth.

Before the final table started two players were inducted into the 2013 Poker Hall of Fame, Scotty Nguyen and Tom McEvoy.

The anticipated 2013 WSOP Main Event final table runs from 4-5 November, the November Niners will be playing for the most prestigious title in poker and more than a million dollars for those finishing in the top 7.

Watch the World Series of Poker action live on ESPN2 or from the WSOP Live Streaming link with 15 minute delay between the live event and the broadcast.

Team 888 Poker, Jay Farber has a back to back elimination knocking out Marc McLaughlin in a AA vs KK hand, then favorite to win JC Tran shortly after.

Ryan Riess also has a back to back knockout eliminating Sylvain Loosli and Amir Lehavot in 3rd and 4th place.

Heads-up is Jay Farber verse Ryan Riess who will return on the 5th November to determine the 2013 WSOP champion.

The 2013 WSOP November Nine will start out with the following chip stacks on the final table of the World Series of Poker.