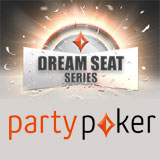 2014 FIBA Spain prize packages can be won on PartyPoker, the Dream Seat Series Package includes: travel, accommodation, cash and two tickets to the 2014 FIBA Semi-finals and Final match in Spain.

The Spain 2014 Dream Seat Series Grand Final takes place at PartyPoker on the 17th August, the winner of the tournament will get a prize package for two persons.

New players get a 100% first deposit bonus up to $500 plus free tournament tickets to the weekly final of the PartyPoker Dream Seat Series.

The 2014 FIBA Basketball World Cup takes place between the 30 August - 14 September with 24 teams competing in 6 cities in Spain.

PartyPoker are offering a great promotion for basketball fans to win a trip to watch the 2014 FIBA Basketball World Cup: semi-final, 3rd/4th place game and final.

The PartyPoker Dream Seat Series package is suited for two persons and includes the following:

The prize package winner must be able to travel to Spain between 9 – 15th September 2014 and acquire any documentation needed to enter Spain for the 2014 FIBA Basketball World Cup.