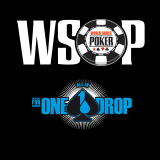 23 players have confirmed their seats for the million dollar buy-in 2014 WSOP Big One for One Drop tournament.

Half of the seats are already confirmed as the event is limited to the first 56 players cap limit. This will be the second time the event has featured on the World Series of Poker schedule with the first taking place in 2012.

Antonio Esfandiari won the 2012 WSOP Big One for One Drop winning more than $18 million which instantly positioned him in first place on the Poker All Time Money List.

The biggest live poker tournament returns with a million dollar buy-in the 2014 WSOP Big One for One Drop. The event attracts High Stakes poker pros and businessmen to the charity poker tournament. 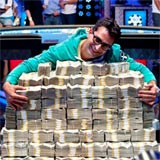 Antonio Esfandiari, 2012 WSOP Big One for One Drop winner comments: “I can’t wait to defend my title,The event was life-changing, but so was my trip to El Salvador after it with the ONE DROP organization to see first hand what a difference the money raised from this event can do for those in dire need of help.”

Poker pros have realized how important this event is on the poker circuit, most of the players on the all time poker money list have registered for the tournament.

$111,111 of each million dollar buy-in is donated to One Drop charity organization founded by businessman Guy Laliberté.

See the list below of confirmed players for the 2014 WSOP Big One for One Drop.

More players are expected to be added soon the tournament is still missing a few key players: Daniel Negreanu, Phil Hellmuth and others.

There are satellites running at several locations including: Aria Resort, Bellagio Resort and WSOP where players can win their million dollar buy-in.