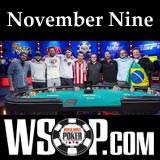 The action is heating up on the 2014 WSOP Main Event final table with Jorryt Van Hoof dominating with a huge chip lead on the other November Nine finalists.

Will Jorryt Van Hoof maintain his chip lead and become the next World Series of Poker champion?

Here are the current results from the 2014 WSOP Main Event final table, we'll update as the results are released on the official WSOP website.

William Tonking shoves all-in with pockets twos and is called by Martin Jacobson with pocket 10's which held up and sent Tonking to the rail with $2,848,833.

Billy Pappas hits the rail in 5th place and was also the last remaining team 888poker player on the table. Jorryt Van Hoof had pocket jacks verses extremely short stacked Pappas who shoved his last chips in with pocket sevens.

Pappas did fairly well considering he is an amateur poker player and is more recognized for his Foosball skills, his 5th place finish paid-out a decent $2,143,174.

Spanish player Andoni Larrabe was knocked out in 6th place by Jorryt Van Hoof who is dominating the final table with his massive chip lead. Larrabe takes home $1,622,080 for his sixth place prize.

Dan Sindelar was knocked out in 7th place by chip leader Jorryt Van Hoof, with a raise and re-raise all-in from Sindelar with pocket jacks verses Van Hoof A3 suited. An ace on the flop sent Sindelar to the rail with $1,235,862.

Team 888poker Bruno Politano is taken out in 8th place after the Brazilian shoved his last chips into the pot and was called by Felix Stephensen. Stephensen's pockets 7's held up till showdown sending the Brazilian packing with just under a million prize money $947,077.

Unfortunately the first Brazilian player to reach the WSOP Main Event Final Table was unsuccessful in bring the gold home to Brazil.