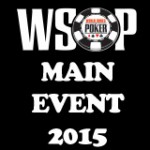 2015 World Series of Poker Main Event Day 6 has come to an end with just 27 players remaining including Daniel Negreanu who is in 9th place.

There is only one day left of the Main Event, on Tuesday July 15 play will continue until only the November Nine players remain.

Chipleader for Day 6 is Thomas Kearney who will try to maintain his leading starting off with the most chips going into Day 7.

At this point all the players have their eyes on the first place prize which is $7,680,021 and 2015 WSOP bracelet and title.

The remain 27 players from 2015 World Series of Poker Main Event Day 6 are busying preparing for the Day 7 where they'll be playing for their seat to the Final Table of nine players.

All players are guaranteed at least $262,574 from this point and reaching the Final Table is a guaranteed million for ninth place.

Thomas Kearney has the largest stack for Day 7 followed closely by Matt Guan, see the chip counts for the end of Day 7 below:

Kelly Minkin was the 2015 WSOP last woman standing, breaking the record for the only female player to make it to Day 6 of the World Series of Poker Main Event.

Daniel Negreanu is the most notable player in the final 27 players, with six WSOP bracelets to his name. Negreanu is running deep in the Main Event and could beat his previous best finish being 11th place in 2001.

Negreanu has won just about every title excepting for the Main Event, no doubt fans will be routing for him to be the 2015 WSOP Main Event Champion.

2015 WSOP Main Event Day 7 starts on Tuesday, July 14 and will continue until only nine players remain, the November Nine.

Once the November Nine players have been determined there will be a 3 month break before the final table plays out.

Highlights will be broadcast on ESPN every week on Tuesday & Thursday leading up to the final table live.