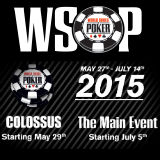 The 2015 WSOP Colossal event has caused much of an outcry and a huge record-breaking achievement at the same time. The largest attended event in the history of live poker featured 22,374 entrants registering for the lowest buy-in event in the series.

What doesn't sit well with most players is the fact that the first place prize is only just over $600K from an $11 million generated prize pool. The tournament does feature a flatter pay out than most events with about 10% of the playing field being paid.

The World Series of Poker will receive more than double the first place prize in tournament fees which were charged at $65 for each $500 buy-in.

While 2,241 positions, about 10% of the playing field will cash in event 5 with the minimum payout being $1,096. What many players find appalling is that the house will rake in $1,454,310 in tournament fees which is more than double the first place prize. So the real winner at the end of the day will be the WSOP.

The 2015 WSOP Colossal event is estimated to have attracted more than 7,500 new players because of it's low buy-in amount. It set a new record for the biggest field of players in a live poker tournament beating previous records by more than three times.

"There is a 100-year-old mathematical formula called the Golden Ratio, where every place relates to the other spot, it has been used at the WSOP since 2008 or 2009 after the tremendous growth in poker. Since then, we've really spent a lot of time and effort on this. Once we finalized it we got sign off from hundreds of poker players and got all the input from Players Advisory Council. They love this Golden Ratio and how every place has a correlation. This is the exact structure, we didn't gimmick it up or do anything for marketing or to make numbers look like they were up.

We spit it in the computer and this is what the numbers should be according to this long-standing mathematical formula. I get it that no one could fathom a tournament like this with 22,000 players. At this buy-in level with this payout structure, it's a matter of what goes up must come down. When you have more players to pay out the percentage going to each has to go down because you now have to spread it out over a wider margin. It's pretty simple, but unless someone has seen all the places and how it all relates, I guess they're going to react without paying attention to the principles of mathematics."

Players are also saying that the World Series Of Poker response to the 2015 WSOP Colossal complaints is just adding fuel to the fire.

I'm not a huge advocate of flat payouts but it's absurd when the house makes more than 1st place money. #WellPlayed @wsop

Colossus paying 600k for first, and I actually thought the event was a huge success for a minute. What an epic fail by @WSOP — Darryll Fish (@DarryllFish) June 1, 2015

What are your views on the 2015 WSOP Colossal payout structure?