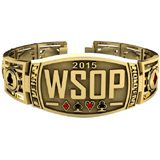 The 2015 WSOP Main Event Day 1A kicked off today with a field of 741 players registered for the most popular event at the World Series of Poker.

The first starting day featured less players registering than last years event which had 771 players taking to the felt.

The Main Event has three starting flights and there are still two more starting days before registration ends and the fields combine for Day 2.

While the fields of 2015 WSOP Main Event Day 1A are smaller than normal, it could still turn around with more players preferring to start on Day 1B & C. The total prize pool can only be calculated once registration on all three starting flights has ended.

In Day 1 play seemed fairly tight as it took more than three hours before the first player was eliminated and that player was Mohammed Ayyash who had his pocket aces cracked.

Last years November Nine player Jorryt van Hoof is among the top of the playing field in Day 1A.

The remaining players from Day 1A will return to play on Wednesday, July 8 for five levels before combining with the rest of the field.

The three starting days take place on July 5th - 7th, giving players a choice which day they would like to register for.

Surviving players from the three starting flights return between July 8th - 9th, survivors will then return for Day 3 with a combined playing field. Players from Day 2A and 2B will be playing in different locations at the Rio Casino.

All the action can be seen in weekly updates televised on ESPN leading up to the 2015 WSOP Main Event final table. The World Series of Poker is sponsored by 888poker where the World plays online.