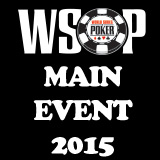 More players have registered in the 2015 WSOP Main Event Day 1B, the second starting flight which had 1,716 players.

The 2014 WSOP Player of the Year, George Danzer was honored for his achievement with a banner in the Brasilia Room, he also started the day announcing "Shuffle Up and Deal".

The last and Main Event of the World Series of Poker is currently underway at the Rio Casino in Las Vegas with a total of 2,457 players registered on the first two of the three starting days.

Hamid Feiz is the overall chipleader at the end of 2015 WSOP Main Event Day 1B which had a list of notifiable players either eliminated or surviving the day.

Day 1B has completed and there is just one more starting day left in the Main Event, Day 1C in the most popular day for registering for the Main Event.

For Day 1C, The Rio expects a large amount of players to add to the playing field which is at 2,457 registered players combining 2015 WSOP Main Event Day 1A & Day 1B. Out of that amount of players there still 1,604 players with active chips in the Main event.

Once Day 1C registration is completed there will be a final total prize pool amount and playing field size.

Nitsche topped the list of notable players and George Danzer proving why he won the title of 2014 WSOP Player of the Year by bagging just under 100K in chips for Day 1B.

Some of the notable poker players that hit the rail and were eliminated on 2015 WSOP Main Event Day 1B included:

Surviving players from the three starting flights return between July 8th - 9th, players from Day 2A and 2B will be playing in different locations at the Rio Casino.

The remaining players from Day 2AB & C will then return for Day 3 as a combined playing field.