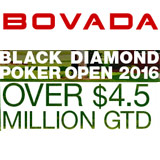 The series is scheduled to take place with daily events from March 7 until April 25 with almost 200 events split between the Championship and Contender Series.

Qualifiers are now also running in the lobby offering players the chance to win their seat to the series from as little as $1.10. The BDPO is designed to be affordable for all bankrolls with it's comprehensive satellite tournament structure.

Get up to $1,000 bonus on your first deposit at Bovada Poker, only signups from USA are accepted.

The 2016 Black Diamond Poker Open is an online poker tournament series hosted by USA poker site Bovada. For the first time ever the events from two series (Championship and Contender) will run on the same dates, appealing to low to high stakes players.

Both the Championship Series and Contender Series will have a Main Event scheduled for April, 24.

As an added bonus during the Bovada BDPO series dates the weekly $100K guaranteed tournament will have it's prize pool increased to $150,000.

New USA players can join in on all the action by signing up and getting 100% bonus matched to your deposited amount up to $1,000.

For seven consecutive weeks, March 13 - April 24, the biggest event on the Bovada Poker tournament schedule will have it's prize pool increased by 50%.

Register for the weekly $100K every Sunday for your chance to score a bigger payday with an extra $50,000 added to the prize pool.

The Bovada BDPO Main Events are running just a few minutes apart for both the Contender series and Championship series.

Buy-in directly or play for your seat through the daily qualifier tournaments which are running in the Bovada lobby.

The 2016 Black Diamond Poker Open features tournament buy-ins ranging from $11 up to $450 for direct buy-ins. You'll be able to start playing for your seat to the BDPO series through the daily qualifier tournaments which start from just $1.10.

Players can only win one seat per event through the qualifier tournaments, any addition seats won will be forfeited.