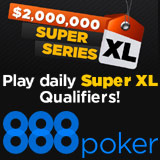 Get your entry to the annual 888poker series by playing the daily 2016 Super XL Qualifier tournaments for free.

The 888 Poker Super XL 2016 returns this January with over two million in guaranteed prize pools spread across thirty-eight scheduled tournaments in the series.

Update: Check out the 888Poker XL Series Schedule May 2016 for the upcoming tournament series.

Get two free tournament tickets to the Super XL Qualifier tournaments when signing up for an 888poker account before 23rd January, 2016. Claim more tickets by spinning the wheel of the 888poker Blast Poker promotion. Tickets can also be purchased from the 888poker club lobby for 50 Gold Tokens under the redeem tab.

Qualify for the 2016 Super XL series for free in daily qualifier tournaments and win your share of the two million dollars that the series offers in combined prize pools.

Register for Super XL Qualifiers in the 888poker lobby under tournaments->Super XL tab. Winners of the qualifiers will automatically be registered for the target tournaments.

Win a tickets to the Super XL Main Event plus an extra $750 in cash for the prize pool for top positions in the tournament.

Win a tickets to the Super XL Main Event plus an extra $750 in cash for the prize pool for top positions in the tournament.

After playing at least one qualifier tournament players will receive an email with their poker mission which will either be cash game or tournament related. Complete the mission daily to claim additional tournament tickets for the promotion.