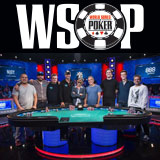 The 2016 WSOP November Nine features two 888 Poker qualifiers who won their entry into the Main Event through the WSOP satellite tournaments on 888poker.

November Niners Griffin Benger (Canada) and Fernando Pons (Spain) are the two prize package winners who spent less than $200 combined and are now guaranteed to win at least a million dollars each.

The November Nine 2016 WSOP Main Event will have a three months break until they return on October 30 to November 1 to play the final table.

Two 888poker qualifiers have made the final table of the 2016 World Series of Poker Main Event, all November Nine players are guaranteed at least a million, with 8 million for first.

Griffin Benger explains how he won the prize package that is going to change his life, after winning a €30 WSOP satellite ticket:

"I was actually in Malta," Benger said of winning his package on 888poker. "I went over to my friend's place, and he was there rooting me on, bought me a smoothie, and we were just there playing, My friend Roland - shout out to Roland. I wasn't going to come play the Main Event unless I won a package, and I sort of decided last minute to register to play the tournament because I find those satellite to be great. Check them out on 888poker. It all just worked out. I steam-rolled through the final three tables of the satellite and got there. Locked it up pretty easily."

The Canadian poker pro has repeated a similar feat to 2003 WSOP Main Event champion Chris Moneymaker who played his way from a satellite tournament winning $2.5 million for first place.

“We are beyond thrilled that for the first time in history, two of our players have made it to the WSOP Final Table through playing in our online Satellite Tournaments.

Professional poker player Griffin Benger entered our Satellites with a $160 investment, alongside our amateur Spanish player Fernando Pons, who, from a mere €30 buy–in is set to become the new Chris Moneymaker story, with a minimum $1,000,000 win as a November Niner.

The incredible success Griffin and Fernando have achieved with 888poker brand, has only strengthened our increasingly dominant presence in the industry, both online and offline.

As the exclusive sponsors of what is no doubt the biggest poker event on the planet, we hope to see history repeat itself with Griffin and Fernando going all the way!” - 888 Holdings, Itai Pazner