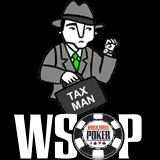 Want to know what the 2016 WSOP Winnings After Tax looks like? players are taxed anywhere from 0% up to over 50% based on what Country or state they are from.

The 2016 WSOP November Nine players that live in the USA are taxed the most losing up to 50 percent of their winnings to the taxman.

Players based in other countries are not taxed more than 30% and in some case there is no tax on gambling winnings at all.

I'm sure the taxman was watching WSOP Main Event Final Table rubbing his hands and waiting for his cut of their winnings.

The real winner of the World Series of Poker Main Event was Kenny Hallaert from Belgium who does not have to pay any tax on his WSOP winnings. Hallaert who finished in 6th place actually earned more than Michael Ruane who finished in 4th place after tax.

Runner up Gordon Vayo was screwed over the most by tax with more than half his winnings (51.46%) taken from him by the taxman in California.

Now I'm glad that Vayo did not win the Main Event because the first place prize would have been taxed $4,119,532 just because of his location.

Maybe players should consider living in another country or state before playing the World Series of Poker Main Event.

Regarding poker in Belgium, it's one of the few countries which actually allows poker and online poker to be played legally by it's citizens. Licensed and legal online poker sites in Belgium include the big three: PokerStars, 888poker and PartyPoker

Players from Belgium are not separated from the rest of the World like other regulated online poker sites ie: Spain, Italy and France.