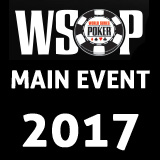 Another day completed and here are the 2017 WSOP Main Event Day 2ABC results with chipleaders, survivors and eliminations.

Surviving players will return on Thursday for Day three with all fields combined battling it out for over eight million dollars as the first place prize.

The bubble is expected to burst at end of Day three when just 1,084 players remain. Play will continue through to day seven when the final table is reached with at least a million guaranteed for a final table appearance.

The two starting fields day 1A & B returned for Day 2AB of the World Series of Poker Main Event on Tuesday July 11.

Half the playing field of Day 2AB were eliminated and the survivors will be back on Thursday for Day 3 with all fields and starting flights combined.

888Poker Download - official sponsors of the 2017 World Series of Poker

Day 2C played out on Thursday with 3,300 players that survived the biggest starting field from Day 1C of the 2017 World Series of Poker Main Event.