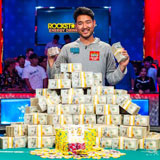 First place prize this year was $8,800,000 and at least a million dollars guaranteed for each of the players on the Main Event final table.

Securing first place was not an easy feat as the final two players battled it for more than 10 hours of heads-up play, the longest final play in WSOP history.

There were 7,874 players registered for the WSOP Main Event, the second highest playing field since 2006 Word Series of Poker Main Event.

Joe Cada was eliminated in fifth place when Cada's pocket tens were beaten by Tony Miles who held Ace-King. Joe Cada misses out on his chance at a 2nd Main Event bracelet.

Nicolas Manion hit the rail in fourth place earning $2,825,000, after 119 hands from when Cada was eliminated.

Micheal Dyer was out next in third after shoving all-in pre-flop with Ace, 10. Tony Miles made the call with Ace Jack eliminating Dyer in third place with a $3,750,000 payday.

The heads-up match begins and lasts for more than 10 hours with Cynn verse Miles for the championship title. On the final hand Miles shoved all-in with two pair and Cynn called with trip Kings.

John Cynn comments on his heads-up battle with Tony Miles: “Tony’s an amazing guy, We’ve been playing next to each other for quite a while now. He plays really well, I think. He put me in a lot of tough spots. Not just hand wise, with his strategy. I probably had to adjust three, four, five, I don’t know how many times. And it seemed like whenever I would adjust he would adjust right back.”