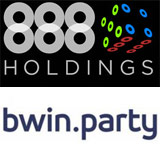 The 888 bwin.party takeover has turned into a bidding war with 888 Holdings and GVC Holdings wanting the assets of bwin.party.

An agreement was reached between 888 Holdings and bwin.party on Friday, July 17, consisting of £898 million ($1.4 billion) in cash & shares in the merged company.

But GVC Holdings are not yet done in bidding for the company and are expected to make a counter offer to out bid their competitors. The first GVC/Amaya bid was a cooperative offer which wasn't received so well because of Amaya involvement in the deal.

GVC Holdings are planning to bid without the help of Amaya in the efforts to try reach an agreement to acquire bwin.party.

When the news of the 888 bwin.party takeover arrived on Friday that the companies had reached an agreement of cash and shares we thought this was a done deal. Although the takeover was not yet set in stone it seemed to be the perfect merger 888 bwin.party. Both companies operate in similar regulated markets including USA, Spain, France and Italy.

The 888 bwin takeover would be the best thing for the poker industry, investors and growth of the 888poker the second largest poker site.

If 888 Holdings acquire the bwin.party Group the changeover is estimated to take place before the end of the year or early in 2016.

Brian Mattingley, 888 Holdings Executive Chairman comments "The board of each company believes that the offer represents a transformational value creation opportunity for both 888 and bwin.party shareholders, the enlarged business will be positioned to benefit from a greater scale with pro forma combined annual revenues of more than $1 billion."

It's expected that GVC Holdings are going to make a counter offer to include more cash than the 888 bwin.party deal. The cooperative offer with Amaya was a higher amount (£906.5 million) than what 888 Holdings were offering (£898 million).

The involvement of Amaya in the deal was one of the factors which were unfavorable to the board and investors. GVC Holdings were interested in acquiring the sports betting products and Amaya were after the poker product. This would have cause a separation in the bwin.party brands, platforms and products, complicating the deal for investors.

The new GVC Holdings counter offer would no doubt exclude Amaya from the deal in the efforts to win over investors with more cash thrown in to outbid 888 Holdings.