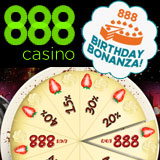 In celebration of the 20th Birthday of 888casino there is a special 888 Casino promo code available until 28th August, 2017.

Players are required to make a deposit of at least €20 for a free spin on the spin of the cake wheel.

Spin the wheel and you could win a €888 freeplay bonus instantly or a 15% - 40% up to €200 FreePlay bonus. The 888 promotion code can be used twice daily allowing players two spins per day on the wheel.

A part of the 888 Casino 20th Birthday Bonanza promotion, players can win freeplay bonuses on 888casino. To be eligible for the promotion players are required to make a deposit of at least €20.

After depositing you get a free spin on the spin of the cake wheel where you can win up to €888 freeplay bonus instantly. Every player can make two deposits per day for a maximum of two daily spins on the wheel.

Follow the steps below to take advantage of the promotion which runs until 28th August, 2017.

Repeat the process twice daily for a maximum of two spins on the wheel per day.

The 888 Casino promotion code can be used up to a maximum of two times a day, during promotion dates 20th-28th August, 2017.

Your spins on the wheel will be given as soon as a deposit of at least €20 using the promotional code on the deposit screen.

Players have 48 hours to spin the wheel from the time of making a successful deposit at 888casino. All prizes are issued as freeplay bonuses which are credited instantly after making a deposit.

Freeplay bonuses must be used within 14 days and is only valid on selected slot games:

Freeplay can be used on any of the games listed and can be split across all of them until the freeplay spins have been completed.

Your freeplay spins winnings are then converted into a bonus amount which has wager requirements to be completed before the amount can be withdrawn.

Players have ninety days to wager thirty times the freeplay bonus amount before withdrawing the winnings.