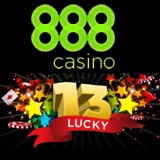 Every 28 minutes a jackpot is hit on 888 Casino with an average of 50 jackpots won daily.

2013 will also be a great year especially since 888 Casino have kick started the year with a special promotion where players can get more than £/€/$800 in FreePlay to play the latest online casino games.

There was more than $3,800,000,000 won on 888Casino in 2012 certainly a very lucky year for players. 888Casino have labeled 2013 as Lucky 13 and predict an ever better year as the rapidly expanding online casino plans to offer bigger and better promotions.

To start the year they have added a special promo where players can get up to £/€/$800 in FreePlay bonuses to play their most popular online casino games.

Once players have completed their first deposit bonus they can claim the 888 Casino FreePlay bonus every time they deposit thereafter.

To claim your £/€/$13 FreePlay bonus use one of the following 888 Casino promotion codes to get free cash to play any of the selected games below:

Simply deposit £/€/$20 or more using one of the 888 Casino promotion codes to claim that bonus, players can use each of the FreePlay promotion codes up to 13 times totaling up to £/€/$800 in FreePlay bonuses.

This offer is only available to players who have already made their first deposit. The FreePlay promotion is perfect for those players looking for an 888 Casino reload bonus, take advantage of this offer by reloading your account before the 13th February 2013.

Bonuses will be granted within 72 hours of completing the wagering requirements.
FreePlay bonuses must be used within 14 days of issue.
The Maximum a player can win per FreePlay deposit: £/€/$20
FreePlay winnings will become available when players have completed their FreePlay.
Players must then wager 30 times the FreePlay winnings before they can withdraw their winnings.

Improvements to the 888Casino software in 2012 includes: