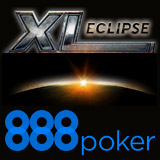 The eight million guaranteed 888 Poker XL Eclipse Championships is scheduled for September 2017 as part of the 888poker XL series.

Start qualifying for your ticket to the series by playing the 888poker XL Eclipse qualifiers which are running now in the lobby.

Make a deposit of at least $10 and you'll get three tickets to play the qualifying tournaments.

Depositing players will also get to spins the daily wheel where they can win tickets to XL Celebration tournaments which take place daily and offer a $1,000 prize pool.

The series of online poker tournaments runs for fifteen days with the combined guaranteed prize pools adding up to over $8 million.

There are tournaments will buy-ins that will accommodate players of all stake levels from micro to high stakes. The series concludes with the XL Eclipse Main Event which guarantees $1,500,000.

Players can start qualifying for the series by paying the XL Eclipse satellites which have buy-ins for only $0.01.

You can also win entry to the series by playing the XL Eclipse Qualifier tournaments, get three tournament tickets when making a deposit using the 888 poker promotional code - ECLIPSE10

Depositing players will get three tournament tickets to play any of the following qualifying tournaments. Win tickets to the relevant XL Eclipse Championships

The 888 poker XL Championship series will also feature three Chip in charity poker tournaments which all tournament fees will be donated to charity by 888poker.

The fess will go to AMF (Against Malaria Foundation) and REG (Raising for Effecting Giving). The chip in tournaments have the following buy-in amounts: $5,200, $109 and $55.

The winner of every XL Eclipse tournament will return to the felt at the end of the series to play the XL Eclipse Champion of Champions tournament.