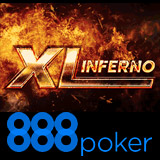 All three championships will feature a $1,5 million guaranteed Main Event plus three charity tournaments where 888poker will donate the tournament fees to REG (Raising for Effecting Giving).

New players who have not yet joined 888poker can sign-up and make a minimum deposit of just $10. Depositors will get three tournament tickets to the qualifier for the XL Inferno Main Event.

The first-ever 888 Poker XL Inferno Championships kicks off in May 2017 with fourteen days of non-stop poker tournaments on the schedule.

The series will feature a wide range of buy-ins to suit players of all stake levels, low buy-ins and decent guarantees. 888poker have also increased the guaranteed prize pools amounts on several of the events.

Players who have not yet deposited at 888poker will be eligible for a special XL Inferno promotion. Get three tournament tickets to the XL Inferno Main Event qualifier when making a first deposit of only $10.

Players must enter the 888 poker promotion code INFERNO10 on the deposit screen to claim their tournament tickets.

Players can use their XL qualifier tournament tickets to play the following daily tournaments to win tickets to the 888 Poker XL Inferno Championships 2017.

The 888 Poker XL Inferno Championships will include three charity poker tournaments which will donated all tournament fees to REG (Raising for Effecting Giving).

The prize pools of these events will be unaffected as 888poker will donate their entire share of the tournament buy-in fee to charity. The money raised will be used to alleviate global poverty.