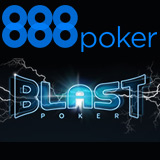 All new players that signup to 888poker during the promotional dates will be eligible for four free tournament tickets to the 888Poker Blast Poker promotion.

Get additional tickets to these tournaments by completing 888poker club challenges, spinning the wheel in the daily Lightning Spin game or by making a first deposit.

Get an additional two free BLAST Poker tournament tickets worth $5 each when making a minimum first deposit of $10 during the promo dates.

Here's how you can claim additional tickets for the promotion by completing daily challenges:

Challenges are only available to players who have made a deposit at 888poker and played at least one game of the new Blast SNG format. Only one ticket for each tournament can be claimed daily.

Most of 888poker promotions include a lucky wheel which players can spin to win prizes. The latest promotion features the Lightning Spin Game which offers the following prizes:

Players must have deposited at 888poker will be eligible for one free spins daily, players that haven't deposited will be limited to one free spin only.