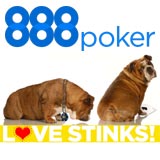 Play for your share of $10,000 in prizes on Valentine's Day in the 888Poker Love Stinks Freeroll.

Haven't got a date for Valentines Day? All the single people can stay home and play poker at 888 Poker instead of braving the cold weather outdoors.

The top 100 players in the freeroll will win some fantastic prizes which include: an iPad Air, PS4's, iPad Mini's, headphones, speakers and 888poker store vouchers up to $150.

Players can also win their share of $10,000 in cash with the daily 888 Poker Winter Games Freerolls which are currently running.

New players get a free Winter Games ticket plus up to $88 free in bonuses, no deposit required.

The 888poker Love Stinks promotion runs from the 10-14 February 2014, only deposits of at least $30 made using the bonus code during these dates will be valid.

Tournament tickets will be issued to players instantly following a successful deposit on 888poker, qualifying players will be notified by email.

All prizes can take up to sixty days for delivery, winners will be sent an 888poker Store coupon code to redeem their prizes, vouchers are valid for up to 30 days from issue.

Players from some countries will be given the cash alternative because of shipping related problems, these countries include: Belarus, Russia, Ukraine and South America countries.

Get you share of $300k in cash prizes in the 888 Poker Winter Games Freerolls, tournaments take place daily with $10,000 up for grabs.

All new players and existing players get their first tournament ticket for free, players must then qualify by completing tasks at the poker tables for additional tickets.

Depositing players can get 5 tournament tickets to the Winter Games Freeroll by using the 888poker promo code below: