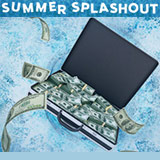 The 888poker Summer SplashOut Promotion starts today with $12,000 to be won in daily prizes until 2nd September 2015. There are twelve daily tournaments where players can win cash and summer-themed prizes.

The Summer SplashOut Tournaments have prize pools ranging from $1,000 up to $3,000, there are four of these events running everyday adding up to $8,000 in cash prizes.

Players can win more tickets to the tournaments by completing the daily poker missions, spinning the Summer Spin game or by making a deposit.

There are also luxury summer holiday packages worth $2,900 to be won in the 888poker Summer Holiday Tournaments.

This summer 888poker are giving away $12,000 daily in their latest 888poker Summer SplashOut promotion running until 2nd September 2015.

Play any of the four daily Summer SplashOut tournaments with prize pools of $1,000, $2,000 and $3,000. the tournaments run several times per day suitable for players in all timezones.

Note that the tournament times will run from the first time shown between (15 July to 11 August 2015) and from the second time between (12 August to 2 September 2015).

The tournament also has $1,000 prize pool for players who don't finish in the top two places. The holiday package prize is awarded based on the winners country of residence.

Play the daily Summer Spin game and win tournament tickets, sportsbets and 888casino freeplay bonuses. The spin game is only available to players who have made a first deposit at 888poker.

Players gets one free spin per day where they stand the chance of winning one of the following items:

Here are the daily summer poker missions which players can complete to get up to twelve tickets per day:

The summer poker missions are only available to players that have already made their first deposit at 888poker.