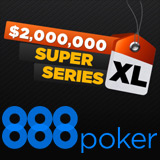 The New Year is a great time to start planing your goals for the year, this year the 888poker Super XL Series 2016 is back and even bigger and better than before. The carefully organized online poker series schedule has been tweaked and optimized with the help of players input.

There are so many reasons to play the 2016 Super XL Series the biggest reason being that there is $2 million in guaranteed prize pools to be won during the series dates 24-31 January.

Start playing for your seat to through the 2016 Super XL qualifier tournaments or buy-in directly on the day for any events on the Super XL 2016 Schedule.

The 888poker Super XL Series 2016 promises to filled with action with thirty-eight scheduled tournaments including the million guaranteed Main Event.

The online poker series has been specially created with the help of players on the 2plus2 forums, management posted the rough draft for the series and asked for players input. The feedback they received allowed them to edit the events and host a bigger and better series for 2016.

Being the 2nd largest poker site in the World, 888poker is listening to what features and tournaments players would like to see implemented.

The 888poker Super XL series features a wide range of buy-in to suit players of all bankrolls with buy-ins starting from $5 up to high-roller tournaments of $1,500. There are also a variety of different poker game types and formats to appeal to all players and not just the popular No-Limit Holdem poker tournaments.

Based on previous tournaments in the series, 888poker have increased the guarantees of the successful events and removed the unpopular tournaments. In 2015 there were records broken for the amount of players registered in the opening event, Micro Main Event and Main Event.

With all the new changes to the Super XL 2016 schedule the attendance for the series is expected to increase significantly for this years events.

Another big change to the series was the dates which have been moved to the last week in January, a time when players seem to be more active on the poker site, after the festive season.