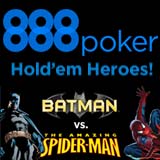 A new special 888Poker Teams Poker tournament has been added the $1,500 Superhero Battle where players can choose their team Batman Vs. Spider-Man.

The Marvel Comic Super heroes will have an epic battle on the poker tables this Sunday Night for a low buy-in of only $0.08.

Players can play for their share of the $1,500 added plus an official The Avengers T-shirt for the top 45 players.

Also taking place this October is the 888 Poker Freeroll Frenzy where players can play for their share of a $10,000 prize pool EVERYDAY!

Play the 888 Poker Superhero Battle and represent either Batman or Spider-Man in this exiting new 888Poker Teams Poker Tournament. Register for this event soon as entry is limited to only 3,000 players and with a low buy-in of only $0.08 the tournament will full up fairly quickly.

Normally Teams Poker events are themed around current sporting events mostly football, with an interesting format for prize distribution. Instead of all the prize pool going to the top positions in the tournament, players have an additional way to cash in the event.

When players register for a Team Poker tournament they will have to choose a team in this instance either Batman or Spider-Man. 50% of the total tournament prize pool will be paid out as a position based prize structure, the other 50% of the prize pool will be shared amongst all the players on the winning team. There are also official The Avengers T-shirts to be won by the top 45 players in the tournament. 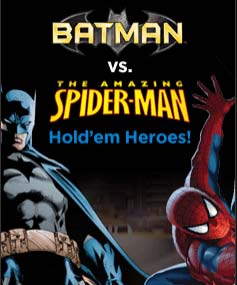 Players can register for Teams Poker tournaments in the 888Poker lobby by clicking on ‘Tournaments’ then ‘Teams’ tab.

When playing Team Poker players must try and earn points for their selected team by winning chips and knocking out players from the OTHER team. For your team to win the 50% prize pool they must earn the most Teams Scores points by the end of the tournament. Even if a player is knocked out of the tournament early he can still win from the Teams Prize Pool.

Players must also at the same time play for position for the other 50% of the prize pool. Sign-up for a Free 888 Poker account and play Teams Poker.