Evern Van Niekerk has been crowned the winner of the AllAfricaPoker Tournament 2008. His first entry into this popular event and his first time ever playing poker on a live table resulted in winning the All-Africa-Poker tournament.

The event proved a success and will now see all the finalists heading down under to play in the Aussie Millions tournament scheduled to be hosted Melbourne, Australia this coming January.

The All Africa Poker Tournament (AAPT) buy in was R25,000 which included 3 nights' accommodation at Orion's Piggs Peak Hotel & Casino for the player and one partner, all food and beverages in the poker room was included plus an entry into the main event with a starting chip stack of 5,000; unlimited rebuys and one addon was allowed Rebuys were set at R5,000 for 5,000 chips with the addon being R7,500 for 12,500 chips with 120 seats available. Players who shared a room at Piggs-Peak Hotel & Casino with another tournament player were entitled to a R2,500 rebate per player. 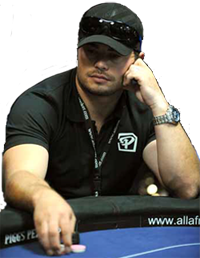 Results for the 15th All-Africa-Poker Tournament 2008 were:

We wish all the finalist the very best of luck for their upcoming Aussie-Poker Millions event.