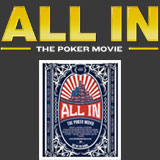 All In - The Poker Movie is out now in movie theaters across the US, the film focuses on the game of poker throughout the ages, and more recently the way the US government destroyed the poker boom.

The documentary shows how online poker became the victim of greedy politicians who took away the rights and freedom of US citizens to play a game which is part of American history.

Winner of the best documentary by CineVegas film festival directed and produced by Douglas Tirola. Download All In - The Poker Movie in digital format which is available directly from the official website.

All In - The Poker Movie Trailer

Check out the famous line Howard Lederer says at the very end of the trailer "the hero of the story was also cheating" and "Heroes of Poker don't cheat" referring to the poker movie Rounders 1998 which featured Matt Damon and Edward Norton. Many Full Tilt Poker players may be offended by Howard Lederer or Chris Ferguson's words which was recorded prior to Black Friday, the day online poker died in the USA.

All In - The Poker Movie Documentary

The documentary is the story of poker and the American dream, how players became so successful almost over night with famous example of Chris Moneymaker who essentially started the Poker Boom when winning the 2003 World Series of Poker Main Event. Moneymaker was an average Joe, gambling degenerate who inspired millions to start playing the game and chase their dreams of becoming a millionaire poker legend.

With interesting interviews with some of the greatest poker players in history and their success stories.

For more info see the official site: All In - The Poker Movie