Fancy playing a heads up match against a Pokerstars pro? Anyone can challenge the Team Pokerstars professionals in the Pokerstars All Star Week taking place between the 23rd-29th March 2009 with a low buy in of only $11 you can enter as a wild card.

Every heads up match will have a Challenger up against a PokerStars Professional. Use your PokerStars bonus code Stars50 for a bonus of 100% up to $50.

For just $11 any PokerStars player can participate as a wildcard and get placed on the opposing team which takes on Team PokerStars Pro. Each player who makes the cut will receive a ticket to the $1,050 SCOOP - All Stakes Main Event.

PokerStars players who have won in the PokerStars Sunday Million during 2008, or ranked high on the Tournament Leader Board during the year, reached Supernova Elite status or made it to a WCOOP final table, will be receiving a special invitation to play for free in All Star Week from Pokerstars.

For both the wildcard players or the invited players, this won't be an easy challenge going up against some of the best poker players in the world who have earned many WSOP bracelets and won millions of dollars during their careers. 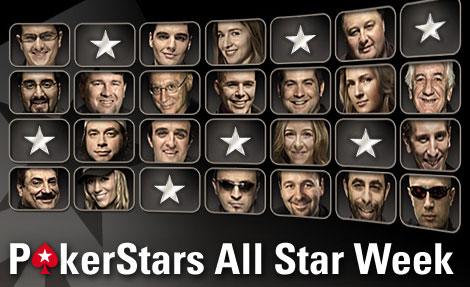 Every heads up match pays $1,000 to the winning player's team. The Team will get their share a prize pool of $1,000 for every match won by their team.

If the Challengers team manages to win 30 out of the 35 heads up matches, they split the total prize pool of $30,000 amongst the Team players.

All money won from any PokerStars Pro Team will be donated to a charity.

Pokerstars are also hosting a tournament which lets players decide which team they are supporting during the All Stars Week either the Challengers team or PokerStars Pro Team. You can only enter one of two tournaments for just 100 FPP which takes place 5th April 2009 at 16:00 ET

Each time a player from either team wins a heads-up match $1000 will be added to that tournaments prize pool.