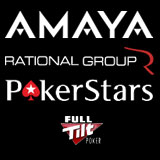 Amaya Gaming Buying PokerStars - The rumor that PokerStars Merger with Amaya Gaming to enter the US market has just turned out to be the biggest takeover of the Worlds Largest Poker site.

This would mean the company would no longer have any ties with Isai Scheinberg. Scheinberg was the stumbling block that has been preventing PokerStars from entering the US regulated poker market.

Amaya Gaming have already been approved for a license to offer legal online poker in New Jersey, the company currently supplies gambling machines and accessories in Canada.

Amaya Gaming buying PokerStars will be the largest deal in the history of online gambling and offers positive outlook for the future of online poker worldwide. US poker players will no doubt rejoice at the news of PokerStars returning to the USA with new owners and a clean slate.

It won't be long before we see FullTitl Poker and PokerStars entering in the US market legally, in the regulated states which include: New Jersey, Neveada and Delaware.

PokerStars currently holds the monopoly in the online poker industry worldwide, excluding the USA. The former number one USA poker site withdrew from the US market after Black Friday when the pokerstars.com domain was seized by the F.B.I.

Isai Scheinberg was indicted and still waiting to face charges for operating after the Unlawful Internet Gambling Enforcement Act came into law in 2006.

The New Jersey Division of Gaming Enforcement suspended the review of PokerStars’ application for an online gambling license for two years, citing the company’s continued association with Scheinberg. Meanwhile in California, some gambling interests want to lock out companies like PokerStars that did business in the U.S. after the UIGEA was passed, an issue that has derailed momentum for online gambling in the most important potential state market. Big casino companies like Caesars Entertainment CZR -2.33% and MGM Resorts MGM -1.85% have launched online gambling units. In the end, it started to make sense for the Scheinbergs to sell.

Isle of Man-headquartered Rational Group’s B2C poker business including PokerStars, Full Tilt Poker, live poker tours and events, and online and TV poker programming.
Oldford Group shareholders led by Mark Scheinberg, founder and Chief Executive Officer, will dispose of their shares to a wholly-owned subsidiary of Amaya. OIdford Group will resign from all positions on completion of the Transaction.

Rational Group’s executive management team will be retained and online poker services provided by PokerStars and Full Tilt Poker will be unaffected by the Transaction, with players continuing to enjoy uninterrupted access to their gaming experience.

The boards of directors of both Amaya and Oldford Group unanimously approved the Agreement. - AmayaGaming.com