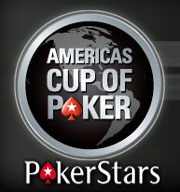 Help get your country into the live final event which takes place at Iguazu Falls, Argentina. Poker Stars qualifiers run from 15 March - 14 April 2010 there are three different tournaments (freeroll, $0.11, $1.10) which can be played to help earn points for your country.

The top 4 point earners from each country will play in the Americas Cup of Poker final live event which has a prize pool of $150,000

Play Poker for your country, help your country qualify for the PokerStars Americas Cup of Poker final live event. There will be 9 rounds of qualifying online tournaments where 10 countries will versus each other to determine a winner. There are three tournaments in each round, a freeroll and $0.11 buy-in and $1.10 buy-in the top 100 players in each round will earn points for their country.

Six Countries will qualify for the final event through points earned in the weekly qualifying rounds, the four teams who fail to qualify will have another chance in the playoffs where the winning two teams go through to the final live event.

The qualifying 8 countries will all meet for a final live tournament, each country will have a team that will be the top four players who earned the most points for their country and a Team PokerStars Pro.

The four Countries who don't qualify through the weekly rounds will have a second chance to get to the final event, these teams will playoff till only two remain.

The 8 qualifying countries will play a live poker event with $150,000 prize pool, there will be a field of 40 players which consists of the top four point earners for their country and Poker Stars Pro. The final takes place at the beautiful Iguazu Falls in Argentina.