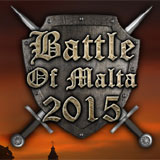 The Battle of Malta 2015 returns for the fourth edition of the annual event in the Mediterranean region between 4-9 November 2015.

Satellite tournaments are running on 888poker offering players the chance to win a prize package starting from just 1¢.

The Battle of Malta 2015 Qualifier takes place every Thursday night until 22 October giving players enough time to qualify for the event online.

The prize package is valued at $2,000 and includes: Main Event buy-in, hotel accommodation and cash for travel.

The €500K guaranteed Battle of Malta Main Event is well known for it's low buy-in and decent guaranteed prize pool. It's also one of the most popular events on the European live poker tournament circuit.

888poker qualifiers are an even more affordable way to secure your seat to this prestigious live poker tournament in Malta.

Players can register for these events from the lobby by clicking on Tournaments->Live Events tab.

Prize package winners must be at least 18 years old the required age to enter the live event and to qualify on 888poker. Winners are also required to wear 888 poker branded merchandise and represent 888poker at the event.

Players can win a ticket to the weekly Battle of Malta 2015 Qualifier by playing the 888Live & Major Tournaments which start from just 1¢.

Play your way through all five steps or buy-in at any level to get to the final step tournament which guarantees tickets to the Battle of Malta 2015 Qualifier.

The 888Live & Major Tournaments is a new qualifying structure that lets players choose which live event they can qualify for including: World Series of Poker, 888Live Local Series tournaments, The Whale tournament and the Battle of Malta 2015.