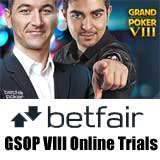 The GSOP VIII online poker tournament series is coming up soon and Betfair Poker are offer players a chance to win $15,000 in tournament tickets for the Grand Series Of Poker VIII. The Betfair GSOP VIII Online Trials run from 18th January until 25st February 2012.

Sign-up for free and get a first deposit bonus up to $2,500 on BetfairPoker.

To qualify for trail freeroll tournaments, players must earn the required amount of player points during the qualification period. there are a total of 500 GSOP VIII tournament tickets split amongst the top 100 players in each Trail and final event.

Players can qualify and play all events provided they meet the qualifying point requirements during the qualification period. Qualifying players will be issued with GSOP VIII tournament tickets based on their finishing position in the trail tournament, players must then manually register for the Trail Tournament.

Betfair Poker Cubed is a new arcade styled poker game which uses dice instead of poker cards at the tables. There are three new games where players can play against other opponents: Shoot the Moons, Dice Hold'em and Liar's Dice.

Dice Hold'em is similar to Texas Hold'em Poker but is played with dice instead of playing cards. Players are dealt two dices to start as hole cards/dice, just like poker there are three betting rounds flop, turn and river. Players must make the best hand using their two hole cards/dice and the three community dice to win the round. Dice Hold'em can be played in SNG, tournament and ring game format.

In Shoot the Moons, players must roll the highest score by rolling the dice three times, after each roll there is a betting round. If a player rolls a double three on the last roll, they automatically win half the table pot, Shoot the Moons is available in SNG, tournament and ring game format plus a weekly freeroll every Sunday.

Liar's Dice is a heads-up poker game where players must beat their opponents using the five dice they were dealt, the dice also replaces it's 1 with a star and can be used as a wild card making up several different combinations. The game is only available in a ring game format.