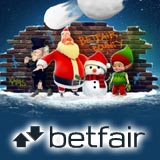 Join the Christmas festivities with the Betfair Poker SNG Snowball Challenge and win a share of the $7k prize pool and tournament tickets to the $1k Christmas Betfair Bounty tourney.

There are three SNG challenges where players can compete for the prizes on offer at Betfair Poker.

The SNG poker promotion will run from 1-22 December and is available to all registered Betfair players.

Betfair Poker is a skin on the iPoker Network, currently the largest poker network in the World which is also home to TitanPoker and WinnerPoker.

Take down the prizes in the Betfair Poker Snowball Challenge by playing SNG poker games with low buy-ins, complete all three simple challenges and qualify for three prizes in this Christmas poker promotion.

The first challenge is the simplest play just five $1.10 SNG games and get your ticket to the Christmas Betfair Bounty which has a $1,000 added to the prize pool.

Qualifying players will receive a token to play the event on the 27 December.

For the second challenge players must up their game by playing at least three SNG games with a $5.50 buy-in, all players will win an equal share of the $2,000 prize pool based on how many players that have completed the challenge.

To qualify for a share of the $5,000 prize pool players must finish in the money in at least five SNG games with buy-in of $5.50.

EG: A player finished in the money in 15 SNG games they would have completed the task three times and will receive three times the regular payout. If 100 players complete the task the player's prize will be $5,000 divided by 100 players for a $50 prize and times by three to get a total prize of $150.

Prizes for all the challenges will be issued the day after the promotion on the 23rd December, 2013. For more information about this online poker room read our Betfair Poker Review.