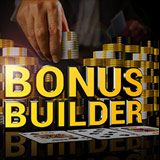 The Bonus Builder Promotion returns to Bwin Poker this month, players can earn up to $1,000 in poker bonuses.

Earn poker points during the promotional dates to build your bonus amount, the more points earned the bigger the bonus will be.

The promotion runs until 30 August with five chances to the earn maximum bonus amount within each two week cycle.

All real money poker games are eligible for the Bonus Builder promotion, opt-in and play your favorite games to qualify.

The Bonus Builder promotion is a great way to get extra poker cash with up to $1,000 in poker bonuses every two weeks until 30 August. Players are required to opt-in for each two week cycle to participate in the promotion.

For example if a player opted in for week 1 and earned 1 point per day for five days of first week they will receive a $5 bonus. In week 2 the player would then have five days to clear their $5 bonus which would be released in four equal parts.

The player would need to earn 12 times the bonus amount (60 poker points) to release the entire bonus, for each 15 points they earn they'll get $1,25.

There are six levels which players can earn poker points to claim the their Bwin bonus.

The promotion runs in two week cycles where players must earn points in week 1 to decide your bonus amount. In week 2 players have the same amount of days to clear their bonus as they played in Week 1.

The following dates are for each week 1 of the Bonus Builder promotion:

Earn poker points during Week 1 to build your bonus amount, play on as many days as you can during week 1.

The following dates are for each week 2 of the Bonus Builder promotion:

During week 2 players will have to clear their bonus which is released in four equal parts of the total bonus amount. To clear the bonus players are required to earn 12 the bonus amount in poker points.