It comes as no big surprise that the remaining poker rooms are all trying to take a massive chunk from Full Tilt Poker's loyal players by offering huge incentives for these players to join their rooms, seeing that Full Tilt Poker will be out of business for at least a month until they may reopen after a hearing with the AGCC scheduled for July 26th 2011.

Even the most loyal of FullTilt players must be steaming mad with this latest closure which will no doubt put Full Tilt in a rather bad spot even if they were to reopen and pay out all the outstanding balances owed. Most hope that this recent closure is only temporary but regardless gross damage has been done to their reputation and one wonders if they can ever restore their once so famous brand name. UB is pretty much dead since the last round of casualties, perhaps next in line in FullTilt.

Full Tilt Poker alternate poker rooms with some rather special sign up incentives recently released include 888 Poker, PokerStars and Titan Poker. The funny part is most of their emails start off with due to the recent news of Full Tilt Poker closing or something to that effect, none the less FullTilt have to a large extent brought this upon themselves and I guess it’s all fair play in this already competitive environment where each poker room’s goal is to get a higher share of the online poker market even at the expense of the now crippled FullTiltPoker.

We have compiled a list of special poker bonus codes some rooms are now offering to get your action in the wake of Full Tilt’s latest worldwide closure. 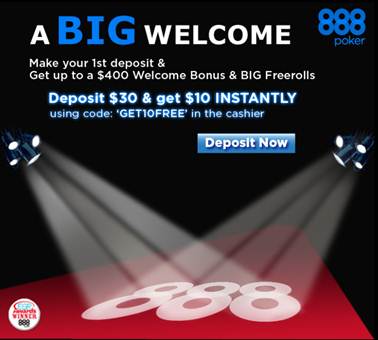 Titan Poker added this bonus quickly and sent it out to their players after news about Full Tilt Poker being forced to close broke, players can get an additional $10 bonus for just 330 points, the bonus is “ON TOP” of the 200% up to $1,000 Titan Poker first deposit bonus, the added cash bonus is claimed to be the “Fastest release rate online”

PokerStars on the other hand went about Full Tilt Poker’s misfortune rather slyly by making a full press release and emailing it to their players assuring them that their funds are safe with PokerStars who are regulated with the Isle of Man Gambling Supervision Commission.

While the recent closure does not affect USA poker players as they were already banned from playing FullTilt Poker and PokerStars along with many other rooms, we have sourced some real money alternate poker rooms that allow USA poker players to play online poker which include Cake Poker, UWinPoker and CarbonPoker for more details about alternate USA pokerrooms.