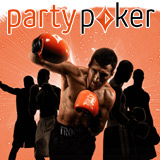 Play the $100K guaranteed Cobra Bounty tournament featuring Carl Froch and other celebrities on 31st January on PartyPoker. There will be a $2,000 bounty prize for knocking out each guest celebrity in the online poker tournament.

The list of celebrities who have been added to the Party Poker tournament include: Carl Froch (The Cobra), Rob Yong, Simon Trumper, Simon Lazenby and Jamie Laing.

The exclusive tournament has a direct buy-in of $109 although satellites are running from as low as $0.01, qualifiers are running in the PartyPoker lobby.

Get your seat to the $100K guaranteed Cobra bounty tournament and play against the super middle-weight boxing champ Carl Froch and several other celebrities who have bounties on their heads.

The Party Poker bounty tournament has a direct buy-in of $109 with $82 from each buy-in dedicated to the prize pool and $20 counting towards bounty prizes. For each player eliminated their is a $20 bounty reward and a massive $2,000 in cash for eliminating one of the celebrities registered in the tournament.

If you're new to Party Poker signup for a free account and get a special welcome bonus when making your first deposit.

The star of the tournament is The Cobra himself (Carl Froch) other guests include: Rob Yong (Dusk Till Dawn), Simon Trumper (UK poker pro), Simon Lazenby (TV presenter for Sky Sports) and Jamie Laing (Made in Chelsea & businessman).

Eliminate any of these players from The Cobra tournament and score a $2,000 bounty prize on top of the $100.000 guaranteed prize pool. You'll also get an extra $20 for every Party poker player you eliminate from the event, knock-out five players and you'll get your buy-in back.

Look out for the celebs seated at the tables and hunt them down for your share of the bounty prizes, these players can easily be identified by their Party Poker screen names listed below: