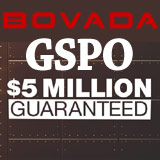 The Bovada Golden Spade Poker Open 2015 is set to be the biggest tournament series yet with over $5 million in guaranteed prize pools.

The GSPO is scheduled to take place between September 12 until November 8 starting with the Contender Series and ending with the Championship Series.

The online poker tournament series consists of 150 events, qualifiers are running now starting from as little as $0.55.

New players get up to a $1,000 first deposit bonus at Bovada Poker, US players only.

Play for your share of $5 million in guaranteed prize pools in the Bovada Golden Spade Poker Open 2015. The Contender Series kicks off from September 12 to October 4 and features micro to low stakes tournaments and is followed by the Championship Series with mid to high stakes buy-ins.

The series includes a variety of different poker game types and concludes with a Main Event. The weekly $100K guaranteed tournament will be included in both series and with an increased prize pool by more than double the amount for the same buy-in.

The biggest event of the entire series is the Golden Spade Poker Open Main Event of the Championship Series which guarantees $500,000 on November 8.

During the Bovada Golden Spade Poker Open 2015 players will be able to play multiple events daily, buy-in directly on the day of the tournament or start qualifying from only $0.55.

The series offers buy-ins that will suit players of all stake levels, you don't want to miss out on all the action over the next few months make sure you mark the dates on your calendar.

Not yet signed up to Bovada Poker yet? new USA players are eligible for a bonus matching their first deposit amount up to a maximum of $1,000.

Make a first deposit or top up your poker bankroll for the Bovada Golden Spade Poker Open 2015 and play for your share of more than $5 million in guaranteed prizes pools.