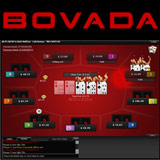 Bovada Review of the top 5 features of the largest poker site for USA poker players in 2015.

Poker traffic is always one of the biggest drawing cards for any online poker site, Bovada currently ranks 3rd for traffic just under the Worlds largest poker site PokerStars and 888poker. Bovada has even more traffic than world-renowned poker sites PartyPoker and FullTilt.

Here are just some of the reason why US players choose Bovada as their favorite poker room. Features include: mobile poker app, Bovada Zone Poker, Anonymous Tables, Card Animations and Rabbit Cam.

Bovada Poker have an excellent selection of features on their software, over the years the online poker has evolved to offer USA players the best platform to play poker online. We've included the best five features in this Bovada review so players can compare with other online poker sites for USA players.

Top of the list would be mobile compatibility, online poker has change somewhat over the last five years having a poker app is now an essential platform. Bovada Mobile Poker games can be played on iPad, iPhone and Android mobiles and tablets.

This feature allows players to play poker on the move, the Bovada poker app is free to download and offers both fun and real money poker games.

Fast fold poker has also become a requirement for most poker sites, players enjoy the face-paced action it provides and it also works well for mobile poker.

Play more poker hands per hour with less waiting time between hands, simply fold your unwanted hole cards and move on to the next table for a new hand.

Bovada Zone Poker was released in 2013 and was molded on the original Rush Poker concept that was launched by the old FullTiltPoker site.

Anonymous Poker Tables is a fairly unique feature which made Bovada stand out from the other poker sites. The idea leveled the playing field as it replaced player names with a seat number.

It also prevents players from using poker tools to get an edge on their competition and tracking all hands played against other users. Professional players hated the idea as they lost the ability to learn the playing styles of their opponents.

Recreational poker players however like the idea as they were no longer bait for the sharks.

Players can select from a variety of card animations on Bovada which enhance the graphics and offer a better gaming experience for players.

Choose from a selection of animated effects including flaming cards and electrified cards which light up when in a big hand. Other effects include cracked aces when a player loses with pocket aces or cash flying around the table when a big pot is won.

The Rabbit Cam feature is also awesome for players wanting to know what the next card would have been after they have folded a drawing hand.

Bovada Poker is only available to USA poker players who reside in US states that do not have regulated poker sites or poker prohibition.