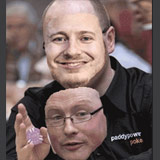 Shortly after his WSOP multiple bracelet win at the 2015 WSOP the Brian Hastings Poker Stars Cheating Saga appeared on the twoplustwo forum under the thread Brian "Stinger88" Hastings Multi-Accounting as "NoelHayes".

After the thread started escalating on the twoplustwo forums, Hastings responded to the accusations adding even more fuel to the fire with his replies to the Brian Hastings Poker Stars Cheating Saga. The confession or admission of guilt was sent from Hastings as a PM to Baker see below:

I think it's ****ed up that you're not answering any of my attempts to reach out and just putting everything public, but it's whatever. I've accepted that my rep is going to take a hit and I'll get through it.

I guess I'll remind you again, I HAD A FRIEND CONTACT YOU WHILE PLAYING THE SCOOP FT!!! I tried to tell you!

The path you're going on by making this a big public ordeal hurts many parties more than it hurts me. i will right my wrongs to the best of my ability given the situation I've put myself in. I'm not so sure others who are involved will be so lucky. On a macro level, you're creating a ton of awful PR for the game of poker, which we both love and would love to be able to play in the comfort of our homes in the country we were born in. This kind of PR is very bad for future regulation in the USA in the online poker industry, it just adds to the shady rep of online poker. Not to mention there are other big names in poker who could get dragged thru the mud when they really didn't do anything wrong.

If you want to continue playing poker for a living in 5 years, i think you should rethink how you're going about things. Again, i really don't care what you post about me, I care about the game of poker and the ability of Americans like you and me to make a living playing the game we love for many years to come.

Making this the biggest story of WSOP at a time when the WSOP itself is losing its way and poker in America is at a crucial tipping point is just bad for the future of the game. Plain and simple.

I don't blame you for your anger, and like I said on the Skype message that i sent to you 2 night ago and you haven't replied to, I'd be happy to compensate you in equity for the sessions we played (including 2k SCOP FT), my intent was never to gain an edge from deception, just to be able to play and live in the USA, where I have a wonderful network of friends and family that I just didn't have when I tried moving to Canada (which ended in me becoming depressed and moving back in with my parents for 4 months, hence the Tweets the other night).

I hope you can understand and we can be friends someday in the future. i know you're not a bad guy and you're a very talent player who's had a rough go of late, but you will rebound. I do disagree with how you've handled thing though. and I don't think my motives are all that selfish ( I was done playing NH after this summer regardless of recent events).