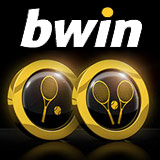 Win bonuses and tournament tickets in the Bwin Poker Missions GSM - Game, Set and Match promotion which is structured on the Grand Slam tennis tournament schedule.

There are a total of 19 poker missions which must be complete on the Bwin Poker tables. Play your way to the finals to win the maximum bonus and tournament ticket prize.

The Bwin Poker Missions are split into Singles and Doubles and mimics the schedule of the Grand Slam Roland Garros in Paris, France.

There are nineteen new Bwin Poker Missions themed around the Grand Slam tennis series in France. Complete the GSM missions and get poker bonuses and tournament ticket as prizes.

The Bwin Poker GSM Missions are only available on the PC client, only real money players will be eligible to opt-in to win prizes.

The first week of the promotion is the Singles missions which take place between 24-31 May 2015. Complete the simple missions to get the reward.

All bonus rewards for the Singles Missions will be issued within 48 hours of the Singles Final. Multiple rewards will added together and players can get up to $70 in bonuses for completing all the missions.

The second week of the promotion features the Doubles missions, there are two missions on each day. Players will need to unlock the first mission to qualify for the matchpoint missions which run between 1-7 June 2015.

Doubles 5B: Matchpoint
Date: 6 June 2015
Objective: finish in the money in a multi-table SNG
Reward: $20 bonus

Doubles 6A: The Final
Date: 7 June 2015
Objective: Get dealt Pocket Aces in a SNG
Reward: Unlock Doubles 6B: Game, Set and Match!

Doubles 6B: Game, Set and Match!
Date: 7 June 2015
Objective: finish in the money in a multi-table SNG
Reward: $10 SNG ticket and $10 tournament ticket

All bonuses and tournament tickets for the Doubles missions will issued when the mission is completed. Bonuses have wagering restrictions and are valid for 30 days.

Players can clear their bonus which is released in 10 part increments of the total bonus amount by earning 8 partypoints for each dollar of the bonus.

Mission objectives must be completed play real money poker games, heads-up and freeroll tournaments are excluded from the qualifying requirements.