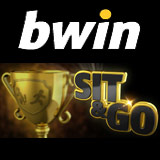 Play at least 25 SNG games before the end of May and win your share of the leaderboard prizes available on two separate buy-in levels.

The top 100 players of each level who play the most SNG games during the promotional dates will receive an extra $10,000 in cash prizes and tournament tickets to the BwinPoker $200K guaranteed tournament.

New players can join in on all the action by signing up to Bwin Poker, make a deposit and get a 100% bonus matching your deposited amount up to $500.

Take on the SNG challenge this May and win your share of the $5,000 in cash prizes which will be evenly distributed to all players who complete the 25 SNG game requirement. There are two separate leaderboards based on the buy-in amounts either micro or low stakes SNG tournaments, qualify between 16-31 May.

All players that manage to play at least 25 SNG games on either level will get and equal share of the leaderboard prize pools. Complete both levels or just one of the levels to win your percentage of the cash prizes.

Only regular SNG tournaments count towards the promotion and does not include: Coinflips, Heads-up or Hyper Turbo SNG games.

There are also extra prizes for the top 100 players of each leaderboard level, play the most tournaments within the promotion dates to rank in the top 100.

All Prizes will be paid out directly into players accounts within 48 hours of end of the promotional dates.

Participate in the Bwin SNG leaderboard promotion between 16-31 May to qualify for these great prizes. BwinPoker is available for PC, MAC and there is also a Bwin Poker App for Android, iPad & iPhone.

Get a 100% bonus matching your deposited amount up to a maximum of $500, the bwin minimum deposit is just $10.