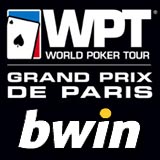 The bwin WPT Grand Prix de Paris is one of the premier destinations on the World Poker Tour schedule, hosted at Aviation Club de France between 25-30 October 2013.

The World Poker Tour Grand Prix de Paris is one of the biggest poker tournament in France in 2103, alongside the 2013 WSOPE Paris which takes place a just a few days before.

Bwin, official sponsors of the WPT Paris 2013, are running weekly satellite tournaments where players can win a WPT prize package worth $13,000 for FREE!.

The 2013 World Poker Tour Paris is centrally located for most European poker players, the WPT should attract a decent amount of players with the WSOP Europe series scheduled for the 12-25 October.

The WPT Grand Prix de Paris will feature two starting days with a single re-entry available the next day, late registration until end of Day 1B.

Players can buy-in at any level starting for free by playing the daily WPT Grand Prix de Paris Freeroll for a ticket to the qualifiers.

Freerolls, qualifiers and satellites are running until 13th October, register for the following events by clicking on the Scheduled tournaments in the poker lobby.

Prize package winners are responsible for arranging their own travel and accommodation with the $3000 paid in to the players account. Players must have the correct document to travel to Paris, France between 25th - 30th October 2013.